Accidents  During live acts the artist, fueled by alcohol, is not averse to athletic activities. At the Punisher Festival in the Spring of 2008, Neoangins act was preceded by a fantastic performance by the Parisian band Clement. The atmosphere was so vibrant that Neoangin lost his head a little bit and climbed the shoulders of an enthusiastic audience member. Not only was latter quite inebriated, he was also more scrawny than Rocky, and it only took a couple of seconds before he could no longer endure this weight on his shoulders, and Neoangin was abruptly disposed on the floor, knees first. Time heals wounds, in this case several months. 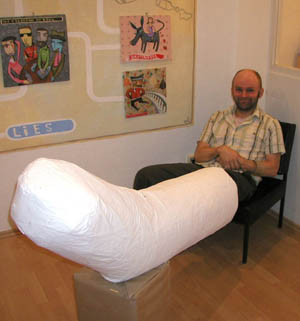