Equipment Neoangin sticks to his radical attitude in matters concerning equipment:  less is more.  Everything must fit into one suitcase, and so Neoangin never goes on tour carrying more than a small midi piano, a Yamaha micro sound module, an MD player and Dr. Sample.  The oversize paintings for the stage can be folded so that they are no larger than a book and fit into a cloth bag.  Most of the suitcase’s space is taken up by the many pajamas and pattern shirts that Avignon brings on tour.
Eighties Very often it is claimed that the Neoanginian sound is strongly influenced by the 80s.  This is only partially true.  Neoangin himself thinks that his sound is mostly shaped by the 60s.  It’s just that the audience is too young to hear this influence.  True however is, that Neoangin released a compilation titled „The Eighties" in 1998—two years too early for the revival with the same name 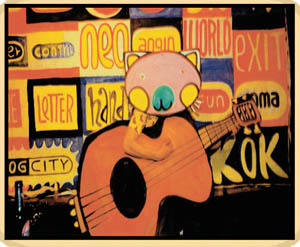 more or less "less is more"